This week I had some serious fun at Innocent! #MentalHealthAwarenessWeek 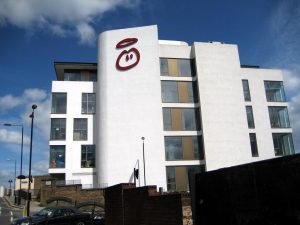 This week I was absolutely delighted to be invited to give some lunchtime talks at Innocent HQ – also known as Fruit Towers. The talks were part of five days of staff activities around Mental Health Awareness Week. I was there to give one of my Pepp Talks, structured on the 7 Ways to life-changing happiness that I feature in my book ‘Happiness the inside job‘.

Here is a brand that really lives up to the ethos of my book : what a location!

Innocent themselves were founded by three student friends, Richard Reed, Adam Balon and Jon Wright who all brought £500 worth of fruit to a music festival in London, set up a stall and sold smoothies while asking their customers to take part in a vote; “Should we give up our day jobs to make smoothies?” Their festival-going customers had to choose one option. Dump their empty smoothie cup into a bin marked ‘yes’, or a bin marked ‘no’. By the end of the day, their ‘yes’ bin was overflowing.

The next day the three men had quit their jobs. The company was set in motion.

What a way to pimp up your purpose right?! 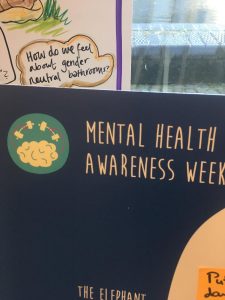 Inviting me in is a perfect example of the way that this business lives up to their values and looks after their staff – and also those around them. From the beginning, the company had philanthropy at the heart of their company – so much so in fact that they didn’t realise how much they were actually donating to various charities and in 2003, nearly led themselves to file for bankruptcy as the start-up was donating almost 46% of their profits.

As a result of this, the company then set up their own charity, ‘the innocent foundation’ that supports farming NGOs in developing countries. 10% of the company profits are now being donated. They also invented ‘Supergran’, now known as the ‘The Big Knit.’ 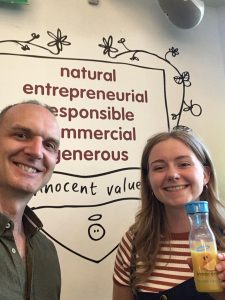 This is where bottles of innocent smoothies are kitted out with their own individually knitted hats in aid of charity. My lovely guide, Laura (whose official title is Office Angel!) told me that they receive 100 hats a day (Some of them are a little too risqué to add to the bottles!)

My tour was fascinating – particularly as I was able to bear witness to the fun that this brand injects into the lives of it’s staff. Everything from the ‘Angel Wall’ where old smoothies and products that have served their time go to heaven. Or the ‘Baby wall’, where every member of staff has a baby photo mounted on a wall, or when a staff leaves they are presented with their own golden smoothie bottle complete with their own personalised ingredients according to their character.

They can even tend their emotional garden…in a real flower garden on the roof terrace. Now it doesn’t get much better than that! 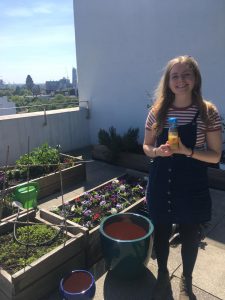 I was delighted that my topic of boosting personal happiness was so popular that I had to run an extra talk! It’s a testament to the ethos of Innocent and how they look after their staff, that they purchased a book for everyone who attended the talk –  ensuring that the energy and happiness that they left the talk with was sure to be reinforced with some of the methods I teach in more detail within its pages. 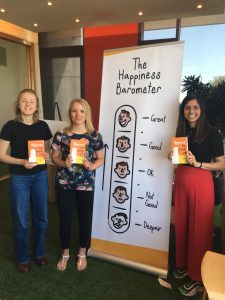 I had some great feedback from the Innocent staff too:

“I really valued and appreciated Matt’s approach; I thought he had been very humble by sharing his personal experience, which made it easier for me to sympathise and also made all the different stages much more tangible and real”

“I believe he has a very engaging way of story-telling, supported by a funny way of representing things and making it easier for the audience to grasp” 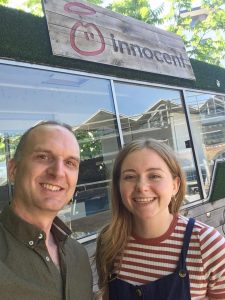 “Matt was a fantastic speaker, probably one of the best speakers we’ve invited in to Fruit Towers. It made a huge difference that he didn’t rely on slides, and instead had physical props. Really great at explaining different concepts, an original breathe of fresh air kind of talk. Great stuff.”

“It was great 😊 I found it really useful and will 100% start reading the book straight away!”

I really love giving these talks … maybe the next one could be with you?

In the meantime, check out this little film about Innocent and you’ll see what I mean! 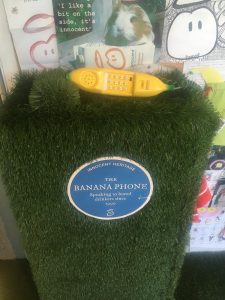 Ps – I forgot to mention one of my favourite parts ‘The Banana Phone!’ On each bottle of Innocent Smoothies it says you can ring the banana phone for a chat. It always used to be this very phone. Nowadays, since the brand expanded, if you ring the banana phone then every member of staff at Innocent is alerted to the fact that it’s ringing – and any single one of them can pick it up for a chat …:)

It got me to thinking….surely I should have a ‘Pepper Phone’ back here at Pepp HQ? What do you think?